skip to main | skip to sidebar

Wow. Wow. Wow. David Cromer directed, our friends Matt and Stacy as Stanley and Stella. Too, too good. 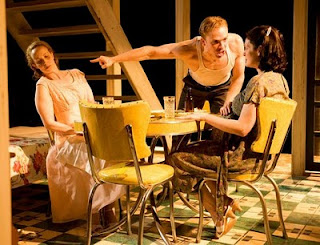 You enter the theater through the door to the bathroom, where Blanche DuBois soaks and Stanley Kowalski wipes off his sweat. Inside, Stella and Stanley's meanly appointed railroad apartment overwhelms the theater, like a giant, faded streetcar derailed in a sultry swamp.

Such is the astonishingly level of intimacy here. Such is the attention to the most precise little details. Such is the feast for the senses on offer in Glencoe.

Cromer, the breakout Chicago director who has been handed three Broadway shows inside two seasons, is inarguably now the definitive current interpreter of mid-century American poetic drama. And since the likes of William Inge and Williams floated up from a heartland that could no longer contain them, there's something apt in Cromer himself replicating their journey from Chicago.

And although New York now may have Cromer trapped inside a Broadway proscenium moving celebrities around, this astonishingly talented director still best springs to life with young, raw actors in a Chicago-style space like Writers' Theatre, where you can reach out and touch Stella's vitals and Stanley's vittles.

Thanks to the all-embracing conception of designer Collette Pollard, some of the seats in this configuration are little more than inches away from the bed where those things that happen between man and women in the night make everything else all right. Assuming you're not, like poor Blanche, the third wheel.

Cromer's version of “A Streetcar Named Desire” makes some unconventional choices. Cromer stages the shadows that dance in Blanche's head — her unfortunate affair with a fellow who turned out to be a “degenerate,” the lost young man who was her melancholy love. And yet Natasha Lowe's uptight Blanche has little in the way of faded Southern gentility; she's more of a full-on talky, prissy neurotic, messing up her long-suffering sister's messy but otherwise viable marriage. When they pack her off, you don't feel so much sympathy as relief for all concerned. That, for some, will be a problem.

Yet Cromer is clearly trying both to treat the play (which features gorgeous sound from Josh Schmidt, Cromer's collaborator on “The Adding Machine”) as an overtly poetic conception (you will have never seen the nightmarish flores sequence better integrated into the whole) and also reveal its oft-hidden inner truths. You might not feel for Blanche, but you surely sense the danger of her situation and make a mental note never to be dependent yourself on the kindness of strangers.

Matt Hawkins' Stanley and Stacy Stoltz's Stella are a couple of needy kids who at least have each other's bodies. Stoltz, who is doing the best work of her career here, doesn't come off as slumming it, but as a woman who got lucky and knows it. Hawkins might not have the primal qualities traditionally associated with Stanley — he's loud and brash yet with barking tenor top-notes — but he's intermittently cocky and needy. Actually, he's a more sympathetic figure here than his nemesis, whom Cromer likes to put in a cold blue light. And that makes for a very interesting ride.

Individual scenes unspool beautifully, including a typically understated but emotionally devastating turn from Danny McCarthy in the role of Mitch. Time and again, scenes are refocused, ripped apart, put back together.

Take, for example, the crucial progression after the fight, when violent Stanley has smacked his wife and she has left him to hide out in the apartment upstairs.

You see Stanley pull himself together. Then you see Stella's foot and leg slowly descending from above, like a redemptive angel. The actors (who are married in real life) head to the bed to make young love, leaving Blanche stewing with Mitch on the porch, incredulous that her abused sister has returned home.

Lowe, her voice blocked and uptight, shows us a woman who doesn't know how to be anything but indignant. But although she is the one to whom Williams gave the lines, and thus the traditional focus of a production, Cromer ensures that you can hardly hear what she's saying for the creaks and cries of passion coming from Stanley and Stella's bed, as a man pulls his woman down and she finds life in her fall.
Posted by Mr. P at 2:46 PM